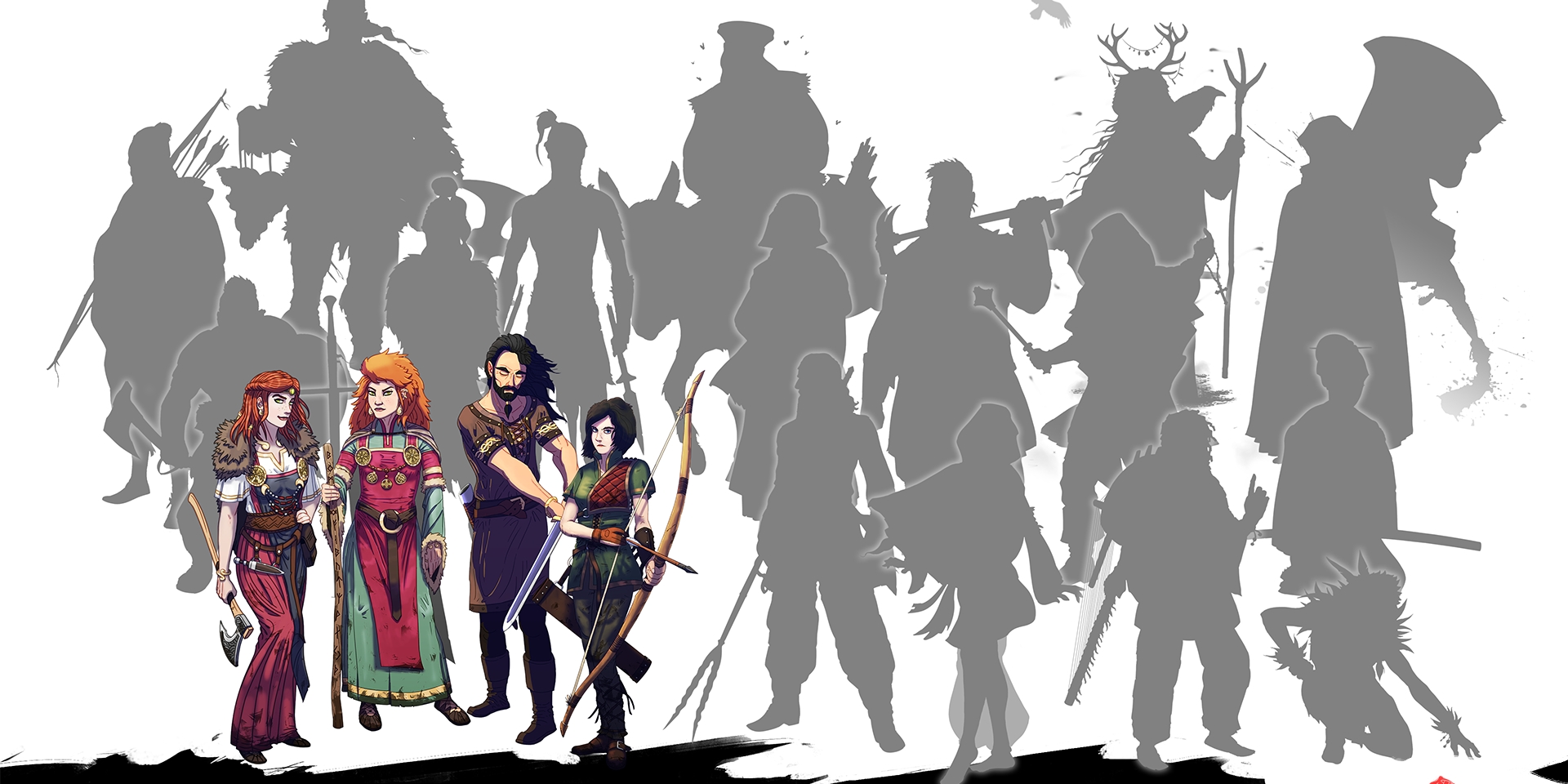 Welcome to the first – hopefully not last – entry in our Dev Blog about the Characters!

We’ll start to unveil some new features for Dead In Vinland from time to time. Until we reach the end of the development.

We already have quite a list, so why not unveil everything right now, you could ask? For one main reason: very few of these new features are implemented into the game for now. We have everything detailed on paper, even made some art for most of the new features. But we haven’t implemented them into the game yet, since they imply a major rework of our DiB engine. So we don’t want to announce too soon features that won’t make it to the release. Either because we run out of budget or, more likely, we playtest the feature and find it not interesting enough.

So well, enough about that. Let’s start talking about the new features we have planned around the characters of Dead In Vinland.

First and foremost, you won’t have 8 playable characters, but 14 to choose from, each with his own backstory and dialogs like in DiB. We didn’t want to add just more generic characters. Each one will have as much depth as in DiB, maybe even more considering that each one will have some secrets to discover and special dialogs chain with other characters.

So yeah, more characters. I’m only talking about PLAYABLE characters here, but there definitively will be some non-playable characters as well.

The second important new feature about the character system, is that this time you start the game with only 4 of them. A viking family exiled by force from their homeland. These are what you could call your main characters, on a system point of view. It will make the beginning of the game less overwhelming to players, with less “who’s this guy again?” moments. These characters are also super important. If you lose one of them, the other ones lose faith and tear the group apart, meaning instant game over. It will lead to many critical decisions, where the well-being of the family can lead to hard, “bad” decisions for the group, and vice-versa.

Think of it like a cooperative board game, where some players have a special agenda of their own. So, I talked about these 4 characters you have since the beginning, but what about the 10 others? These are what we called secondary characters, because they are not handled in the same way as the main characters: if a secondary character dies, you can still continue playing (and winning) the game, and we introduced recruiting and expelling mechanics for them.

Each secondary character will be (randomly) scattered on the island, doing their best with surviving on their own. You will have to explore the island to find them, and convince them to join forces with you, in your camp. Most will be pleading to come with you, but some could be a bit more reluctant… But in the end, your camp should grow in numbers throughout your progression.

Still, there will be a limit of how many characters you can have at the same time on your camp. So you will also have the possibility to expel anyone – apart from the main characters – from your camp, at any time! It will be up to you to decide if it can be advantageous to kick some of the lazy ones to make room to recruit new, fresh teammates. Or if you’ll stick with characters that you are fond of, even if they are useless 🙂

You’ll just have to remember that expelling a character will be definitive, often meaning a certain death for him/her. So choose well…

We thought that this mechanic of camp management was lacking in DiB. You’re stuck with your starting group, and can’t decide to expel anyone, unless making him/her starve to death (and it’s not nice). We feel that the camp will be much more dynamic like that from one player to another or one playthrough to another. Since you won’t have access to the same characters at the same time on each new game (their locations will be randomized on the map).

And a final word about this system: it enables us to add new secondary characters more easily in possible DLC/extensions. Something that was very hard to do in DiB because of how we designed it.