“A dreadful storm was gathering that night when Eirik, the unfortunate bastard of the old Jarl, and Blodeuwedd, his wife, escaped the burning ashes that used to be their home, with the men of Hagbard “Thor’s Hammer” on their trail.“

Exiled on a faraway, unknown land, lead Eirik and his family on their quest to survive. Manage their physical and mental health, explore the island, organize your camp and deal with other human beings, some will help you, if you want, and some will be less docile… Discover some esoteric mysteries while you’re there too, mysteries that could save your life?

Dead In Vinland is a survival management game with RPG and adventure elements developed by a small team of 3 indie vikings, and is due to release on April 12th 2018 on PC / MAC

It’s the sequel/prequel/spin-off Dead In Bermuda, our first game released in 2015, built on the same core principles but expanded in every way! 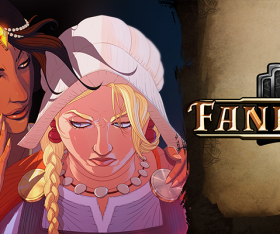 The core gameplay of the game is based on Dead In Bermuda, so you can check it to give you an overview (we have a free demo of the beginning of the game on Steam). But we are working hard to enhance every bit of our engine. We planned a lot of new features, some big, some small, some really big and totally new… We’ll post them here during development when they are implemented into the game, so keep on following our news on Twitter 🙂

Check out our first game!

DEAD IN BERMUDA is a survival management game with RPG and adventure elements, in which you lead a team of 8 survivors from a plane crash on a strange island.

Assign your survivors to tasks, gain experience and level up your survival skills, research and craft new items for the camp, explore the island for resources and solve the mysteries behind an ancient atlantean prophecy.

(You don’t need to play Dead In Bermuda to enjoy the story of Dead In Vinland, but it will be a good training for the core concepts of the game)

Give us some love

We have a Gamepedia Wiki!